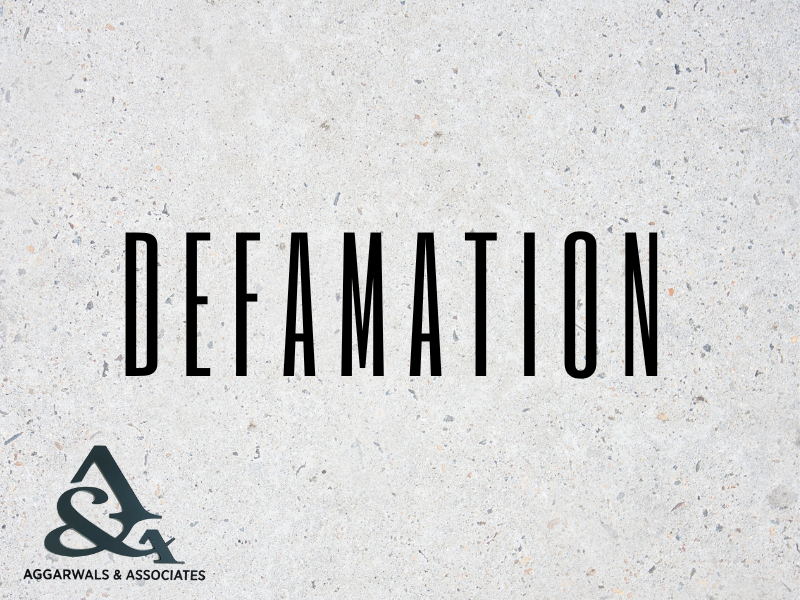 Defamation is both a criminal as well as a civil offence in India. Defamation as a civil offence is punishable under the law of torts, wherein the accused person is punished through the award of damages. While in criminal law, defamation is codified under the Indian Penal Code, 1860, hereinafter referred to as IPC, under which the accused has to go under the imprisonment prescribed by law.  Before moving ahead, it is imperative to know the meaning of defamation.

In simple terms, defamation is saying or writing something about any person that hurts the reputation of such person. It can either be written or oral. In legal language, defamation is of two types one is libel and another is slander. Libel is a written or published defamatory statement, whereas slander is defamation that is spoken by the accused person. Markedly, in both cases, the defamatory statement should converse to a third party.

What are the elements of defamation?

The rudimentary elements of defamation are given below:-

What types of remedies are available?

In India, making disparaging remarks against someone is a civil and criminal offence. Therefore, an individual whose reputation got damaged can avail of remedies under both the laws.

Civil Remedy: – The remedy for defamation in civil law is provided under the Law of Torts. In a civil defamation case, an aggrieved person can move to the court to seek damages in form of monetary compensation from the accused. Once all the conditions of defamation as mentioned hereinabove are satisfied, a defamation suit subsists, and the wrongdoer has to take defense. If he/she fails to lead supporting evidence, the suit is decided in favour of the victim.

Criminal Remedy: – Under criminal law, the remedy is available under Sections 499 to 502 of IPC. Under which, a wrongdoer can be punished with simple imprisonment up to two years, or with a fine or with both. In a criminal case, the intention to cause defamation is a crucial element. In absence of intention, the knowledge that the said publication is going to harm someone’s reputation,

What are the exceptions to defamation under criminal law?

There are ten exceptions to defamation listed in Section 499 of IPC, the first of which is ‘the defence of truth.’ The trust must meet two requirements in order to be a viable defence in a defamation lawsuit. It must be factually accurate and it must be in the public interest. In general, the alleged defamatory remark ceases to be disagreeable if it is based on a public document, including court records. The following are the additional exceptions:-

In concluding words, to avoid liability under the aforementioned criminal defamation statute, publishers, filmmakers and other media platforms as well as individuals who publish content must be aware of it. A number of publications, films and television programmers have been outlawed in India due to their defamatory material. In the light of the aforementioned, it is always recommended that parties exercise caution and conduct a legal assessment of their content to identify any defamation issues and resolve them before publishing.