The principal objective of the criminal law is to protect the society by punishing the perpetrators. However, the courts have often reiterated that no one shall be punished without a fair trial. A person might have even been caught red-handed, and yet he is not to be punished unless he is tried and pronounced guilty by a competent court of law. In dispensation of justice, it is extremely important that not only that justice should be done but also appears to have been done. One more cardinal principal of criminal law which the courts follow is that everyone is presumed innocent until proven guilty beyond reasonable shadow of a doubt by a competent court. Thus, it is absolutely important that a person suspected to be guilty of committing a crime is brought on trial before the competent court.

In India, the law of criminal procedure is mainly encapsulated in Criminal Procedure Code, 1973. It provides the machinery for the detection of crime, apprehension of suspected criminals, collection of evidence, determination of the guilt or innocence of the suspected person. In addition, the Code also delves into certain auxiliary aspects such as prevention of offences Chapter VIII (sections 106-124); maintenance of wives, children and parents Chapter IX (sections 124-128) etc. The Code also controls and regulates the working of the machinery which is set up for investigation and trial of offences.

Hierarchy of Criminal Courts in India 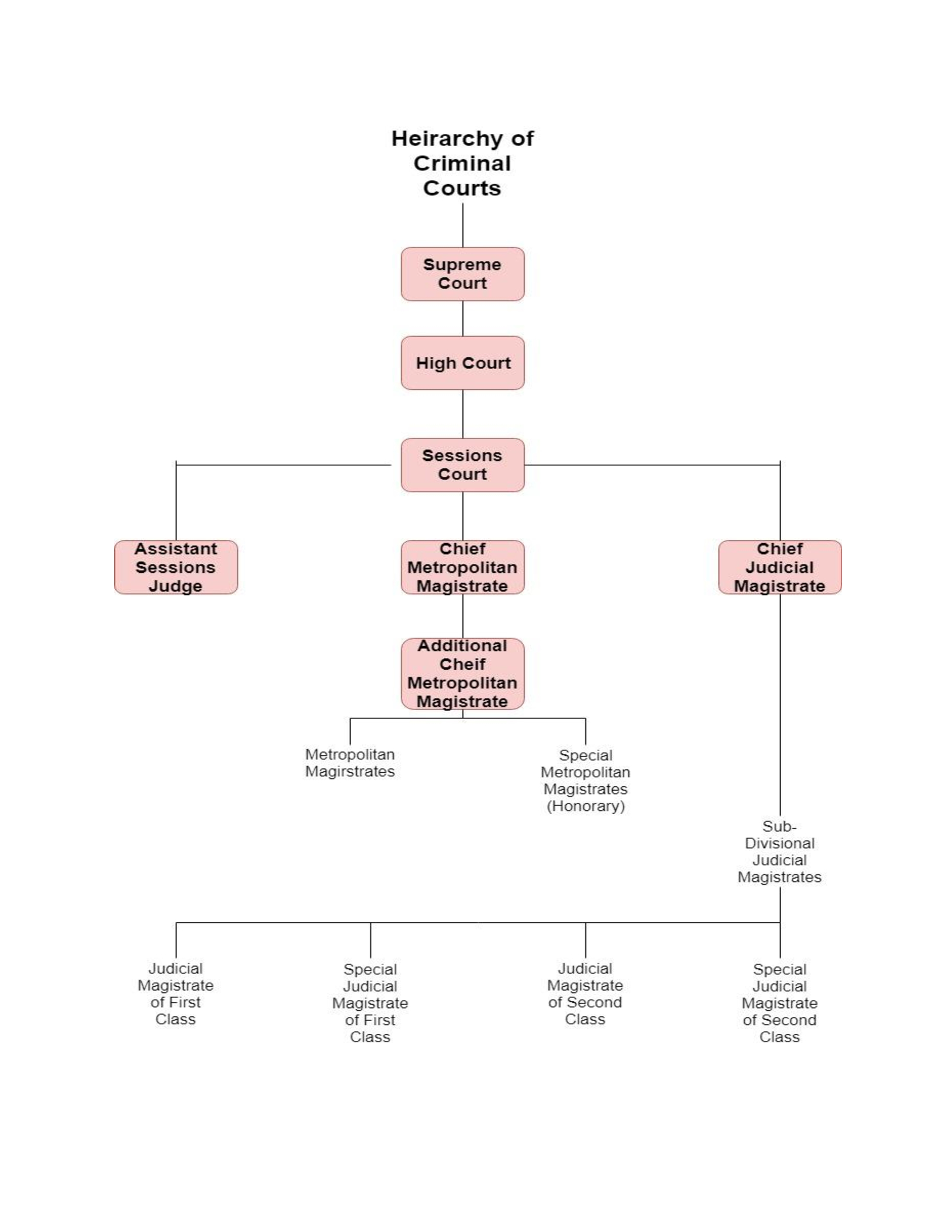 There are certain special courts catering to the special provisions enacted by a legislative action. For instance, Children’s Court under Juvenile Justice (Care and Protection) Act, 2000, or the courts called as ‘Nyaya Panchayats’ or ‘Panchayati Adalats’ constituted under the different State Panchayati Raj Acts, among others.

In every district (not being a metropolitan area), there shall be established as many Courts of Judicial Magistrate of First Class and Second Class, and at such places, as the State Government may, after consultation with the High Court, may specify. Thus, the power to determine the number of Courts of Judicial Magistrates of either class and their location is left to the State Government since it will have to take into account various administrative and financial considerations.

[With respect to a Metropolitan Magistrate- As in a district, every metropolitan area will have almost a parallel set-up of Judicial Magistrate as aforemention.]

Lastly, the High Courts may, if requested by the Central and State Government, confer upon any person who holds or has held any post under the government, all or any of the powers conferred or conferrable by or under the Code on a Judicial Magistrate First Class or Second Class or on a Metropolitan Magistrate, in respect to a particular cases.

Sentences which the Courts may pass

Often it is the victim(s) of the crime or person(s) who are aggrieved of the said crime who sets the criminal law in motion. It is in the general interest of the society that perpetrators are detected and punished, and for that to happen, the legal system encourages the citizens to invoke the legal process to achieve this end. Accordingly, under the Criminal Procedure Code, 1973 (CrPC), any person can approach the competent Judicial Magistrate and lodge a complaint regarding the commission of an offence (Section 190 CrPC). The Magistrate may then get the matter investigated further by directing the police to do so, or may have an inquiry made into the case with a view to ascertain that whether there is sufficient ground for proceeding (Section 201 CrPC). If in the opinion of the Magistrate, there lies sufficient ground for moving further into the case, he would issue summons or warrants for securing the attendance of the accused for his trial (Section 204, CrPC). However, if the process is invoked, it is then the responsibility of the complainant to collect evidence and to produce it in the court.

The CrPC has classified offences into two categories:-

In case of the former, a police officer can arrest the alleged culprit without warrant and can investigate into such a case without any orders from a Magistrate. In a cognizable case, it is the responsibility of the State (and the police) to bring the offender to justice. Generally, all serious offences are considered as cognizable. By and large, offences punishable with imprisonment for not less than three years are taken as serious offences.  However, certain offences though serious have been considered as non-cognizable offences. For instance, Offences relating to marriage including bigamy and adultery are punishable with more than five years of imprisonment but, they are more in the nature of private wrongs.

In case of the latter, generally speaking, a police officer cannot arrest without a warrant and furthermore, such officer has neither the duty nor the power to investigate, into such an offence without the authority given by a Judicial Magistrate. [However, under section 42, if a non-cognizable offence is committed in the presence of a police officer, and the person committing so refuses to give his name and address, the police officer can arrest him without a warrant with a view to ascertain his real name and address].As a broad proposition it can be deduced that offences which are not serious and are punishable with less than three years imprisonment are treated as non-cognizable offences. These offences are mostly in the nature of a private wrong, for example, assault, hurt etc. However, again, certain offences which are not punishable with more than three years or more have been made cognizable. For instance, offences against Public Tranquility (covered under Chapter VIII of Indian Penal Code) are punishable with less than three years imprisonment, yet, they have been made cognizable.